Also from Zoxell: These are the Voyages

Daniel Noah Shays is a human, born on Earth to a hard-working agriculturalist couple in the South Carolina back-country. Dan’s father was a farmer, as was his father’s father, going back hundreds of years. The world had moved past agriculture a long time ago. Having eliminated food shortages and hunger with the onset of replication technology, food growers on Earth were no longer necessary. This fact did not diminish the demand for fresh, organic vegetables, eggs, dairy, and meat, however. 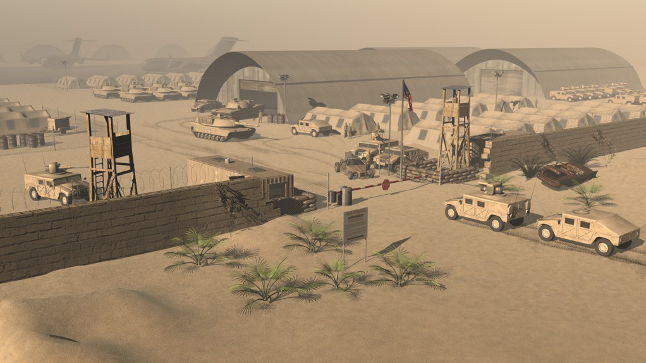 Warren and Benita travel from the suburbs of SimCity toward a sleepy desert community named Strangetown.

Having served a storied military career and worked tirelessly on the Pleasantview police force, Warren has managed to put together an impressive collection of influential friends and associates. Lists such as these are best leveraged sparingly. The current situation certainly seems weighty enough to solicit a measure of undocumented assistance, however. Warren’s acquaintance is a high-ranking officer working inside “Area 15”, a semi-secret military base located outside of Strangetown. The officer seems agreeable, if not enthusiastic, about helping to knock Taxmoore from on top of the hill.

Coincidently, Isla Paradiso’s military had asked “Area 15” for help with an investigation they are conducting. Benita and Warren are given quiet passage onboard a C-130 cargo plane along with a group of specialists bound for the remote, tropical island. Booking a flight would have been much more simple, of course. With any luck, however, Benita will be back home before either Alfonzo or Joan Mosley are able to piece together what happened.

The blooming friendship between Warren’s daughter Skyler and her roommate, Van, relies heavily on trust. She had orchestrated the entire operation from its inception.

Skyler finds herself resenting the demand for secrecy regarding Benita’s whereabouts. Van had learned from Benita’s family that she had vanished. The family has been nearly hysterical with apprehension. And though Van hides it well, his own anxiety does not escape her attention. Skyler makes a point of explaining the entire situation to him as soon her father and Benita have safely boarded the plane. Van is not overly emotional and has always been great about sharing his thoughts with her. She is understandably worried when he withdraws into himself upon hearing the news. Comforting Van is obviously her first concern, but doing so would most certainly disquiet her restless libido. Skyler eventually decides it’s best to give him whatever personal space he requires. Though she does insist that he come with her to the Gonçalves home to meet her father when they arrive.

Van eventually relents and agrees. He’s there with Skyler and the Gonçalves tribe when a military vehicle carrying Benita and Warren arrives. Skyler notes the equivocally brief eye contact between Van and Benita before she unceremoniously disappears into the house.

Van remains outside with Warren, suffering the typical father/boyfriend debrief. Warren eventually smiles, shakes Van’s hand, then claps him enthusiastically on the shoulder. Skyler looks away wistfully. She had hoped, for some reason, that her dad wouldn’t like him. She leaves the two men to bond, wandering away to collect her thoughts and build up her courage. What comes next isn’t going to be easy.

She receives a text message from her father an hour later, stating that he’s heading to a resort to make tonight’s reservations. Skyler finds Van outside the Gonçalves home, in the yard talking with Benita’s kid sister Natalia. As she approaches, she can hear the little girl attempting to convince Van that mermaids are real. According to her research, they walk around Isla Paradiso during the day then secretly swim back to the ocean at night. Van listens attentively, promising to look harder for them the next time he goes diving. Van notices Skyler’s approaching but barely registers a smile. Natalia squeals with excitement, begging Van to let her go with him. Van smirks and then points toward Skyler. She has to be “that big” before she can go with him. Natalia eyes Skyler suspiciously then whispers loudly enough for Skyler to hear. She does not like “that lady”. Van nods, simultaneously winking at Skyler. He doesn’t like her either, but he still needs to talk with her. Natalia smiles mischievously, then runs toward the house. She wrinkles her nose and sticks out her tongue at Skyler as she passes, tattling, “He doesn’t like you.” 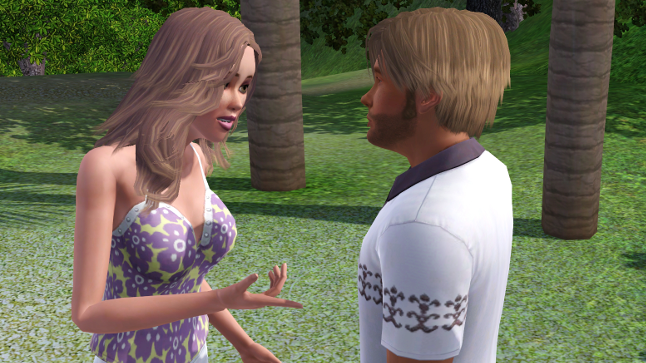 Skyler laughs while casually approaching Van and watching Natalia skip into the house. He had remained outside the whole evening, while Benita has remained inside. Skyler had hoped to make this a clean break. She does her best to smile, asking him about the situation. Van shrugs, explaining that Natalia’s got quite a little crush going. Skyler laughs spontaneously. Natalia’s crush is obvious. What she was asking about, rather, was the reason why Van is outside and not with Benita. Van exhales loudly, his body language betraying a simmering turmoil. Van’s voice is measured and tense. What’s the point? It wasn’t Benita’s choice to be here.

She was extracted from the situation for her own safety. If things hadn’t gone awry, where would she be now? Van swings angrily at a broad palm leaf in the path of his pacing and connects with a loud “pop!”. Skyler flinches out of reflex, recalling past video shoots where she had been in the position of the palm leaf. She asks flatly whether he has considered asking Benita that question. Van scoffs, sarcastically acting out his side of the conversation, “Oh, hey! Too bad about your boss abducting your kid sister and wanting to murder you, right? By the way, about that whole getting dumped thing – are we good now?”

Skyler presses her lips together and sets her jaw impatiently. It’s awkward, yes, but no reason to act like a jerk. Van exhales loudly again, then covers his face with his hand and apologizes. Skyler’s heart sinks. She has never seen him so conflicted…it’s tearing him up. She quietly approaches Van then tentatively touches his bicep; dreading what must follow. Van says quietly he has something to tell her. It’s something they’ve never really talked about before. Skyler recoils slightly. She knows where this is leading. Both she and Van had toyed with the idea of becoming serious and committed, but neither has been willing to make the final push. He begins to speak, but Skyler places her index finger on his lips and silences him with a gentle hush. She smiles sadly while gazing into his troubled eyes. He had not spoken the words, but she returns the sentiment regardless, 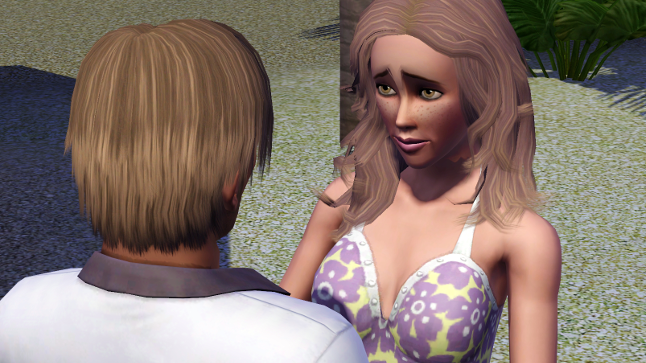 She continues in a whisper, but not before savoring those precious words. He saved her life that first night. She had contemplated suicide before but had always lacked the resolve. If Van had not found her and taken her in when he did… Skyler’s voice trails off, shuddering. There are so many other reasons to love him, she’d be here all night listing them. He pulled her out of the filth, cleaned her off, and guarded her tirelessly against falling back in. He knew where she’d been and what she’d done. Still, he peered into her soul …and cherished her. He helped her understand she is worth more than flesh. 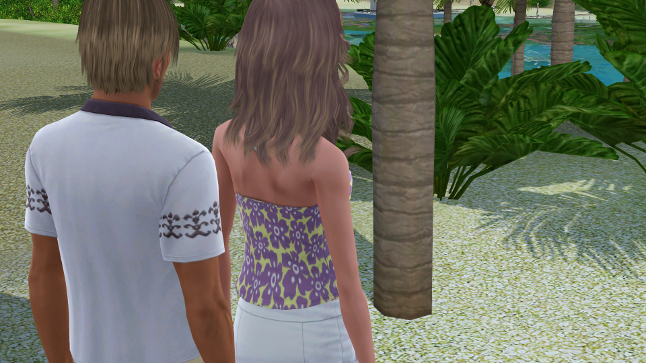 The honest truth is that she is not ready for a romantic relationship or any relationship that might lead to intimacy. It was intimacy, or the illusion of it, that nearly consumed her. Skyler turns her gaze to the ocean. The little girl who pressed “play” has been neglected for too long. Skyler wants to get to know her again. One thing she does remember about that little girl, is that she doesn’t like sharing. That doesn’t bode well for a guy who always gives so much of himself. Reflecting upon their many deep conversations, Skyler recounts the time he had mentioned wanting a family. Skyler chuckles. She doesn’t even like kids. Just watching Van interact with Natalia a few minutes ago was irritating. What kind of mother would she be, constantly annoyed with her own children for enjoying a close relationship with their father?

Her ambivalence toward children may eventually fade as she comes to terms with her own childhood. Unfortunately, starting a family with Van before that happens would be a terrible mistake. It’s too bad, though, because their kids would have been unbelievably gorgeous. She bumps him playfully and earns a sly smirk. What she needs from Van is exactly what he has been giving her. She needs his strength to lean on; a reminder that companionship and love can exist without intimacy. She cannot afford to forget what that looks like.

Skyler takes a deep breath and plunges head-first into the part of the conversation she has been dreading. She and her father are staying at a resort tonight. They’re taking a flight to Pleasantview in the morning. She needs to recharge and reconnect with family. When Van fails to respond, she fills his awkward silence by sharing a new ambition. Brenda and her father were both impressed with the work she had done in this case. She wants to keep going. She has experienced the horrors of human trafficking from the inside. She knows how it works, who the targets are, and the methods employed to lure vulnerable young women away. Armed with experience, she should be able to inflict untold damage both before and after trafficking occurs. Just as she was saved, she wants to devote herself to rescuing young women from those same horrors. Van nods approvingly and offers sober encouragement. She is going to be formidable. 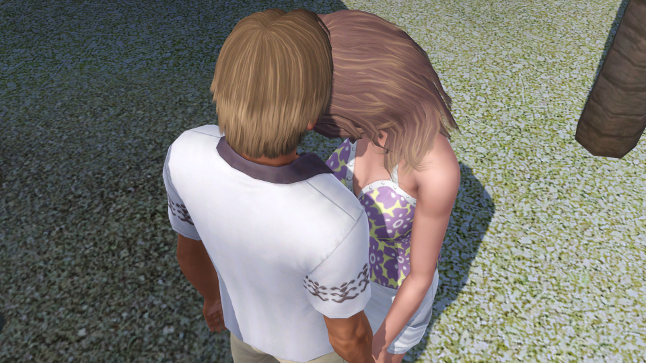 A taxi pulls up to the front of the house, prompting Skyler to release a small sigh. This is her ride. She leans into Van and hugs him tightly around his waist. He reciprocates and extends his arms around her back and shoulders. After standing a long time like this, Skyler releases her grip, affirming they are both going to be okay – it’s all going to be good. Van smiles and commends her for turning her life around these past several months. For what it’s worth – he’s proud of her. She rests her forehead on his chest then turns and walks silently toward the cab.

She climbs into the car then disappears along with the taxi’s tail lights around the first turn toward Pleasantview. 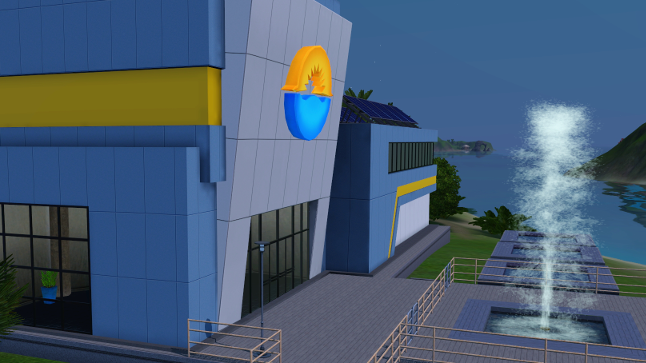 August 20, 2017
Van and Benita finally begin to heal their relationship and discover that their friendship does, indeed, have a much more complicated component. Big things await our embattled couple.
Next up – Frightening news from Area 15 is accompanied by a surprise visit from an old friend. Also, Benita receives help from a very unexpected source.

Faith Based Gaming And Fellowship

The rise of the Maldini crime family over ten generations

8 Kids And A Business

Balancing a large family with a small business, all by God's mercy, grace and providence

America's Civil War through the eyes of a 9-year-old girl.

The Chouette Legacy
The Twinbrook Fields

Generation 15: Science vs. The Paranormal